In order to understand more about Cinco de Mayo, we need to understand a bit about Mexico’s history.  Mexico was first a colony of Spain from which it gained its independence in 1810.  This is celebrated on September 16 as Mexico’s Independence Day.

Years after that in 1861, the country was facing some difficulties and the President, Benito Juarez made the declaration that any debts were being put on hold and Mexico would not be paying any money for a period of time. With this declaration, the countries that had loaned money to Mexico immediately came to Mexico to ask for payment.  While most countries were able to come to an agreement, France under the leadership of Napoleon III decided that it would be a good time to come and establish its empire in Mexico.

Shortly after, French troops arrived in the port of Veracruz and started working their way towards Mexico City to take over the government.  Obviously, Mexico did not want France to take over and they fought back.  The Mexicans were able to gather about 4,000 troops under the leadership of Ignacio Zaragoza and waited for the French in Puebla.  The French army was almost twice the size of the Mexican Army, but because they knew the territory and were fighting for the land that they loved, the Mexican army was able to win the Battle for Puebla.  The French retreated and Mexico was safe (for the time being).

Unfortunately, the story doesn’t end there.  A year later, France came back with 30,000 soldiers and this time were able to take over Mexico.  Then a few years later, France decided they didn’t want to rule Mexico anymore and left.  Mexico became an independent country again (and Benito Juarez was reestablished as President).

As you can see, the Battle for Puebla was a great victory for the Mexican people and it was established as a national holiday.  Schools are closed and there are often small parades in memory of this great moment.  However, the main celebration of this day came from someplace unexpected.  Almost a year after the fight in Puebla, the Mexican people working in the mines in California heard about the victory.  Their sense of national pride sparked a great celebration.  From that time on, the Mexican people living in California celebrated their homeland on Cinco de Mayo.

The celebration grew over the years.  In California, there are many parades and celebrations for this day.  The popularity of the holiday spread and soon people of Mexican descent all over the United States joined in the celebration.  Cinco de Mayo has become an American celebration of Mexico.  Many people celebrate with parades, celebrations, or eating Mexican food.  Many schools do activities that honor the Mexican heritage on this day. 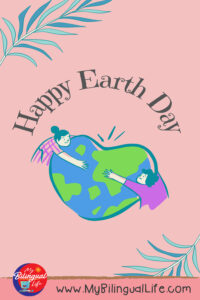 Earth Day was first celebrated on April 22, 1970.  It was suggested by Senator Gaylord Nelson as a way to bring awareness to important environmental issues.  The first Earth Day was considered a day of education and that has continued ever since.

Earth Day was meant to bring our attention to the environmental issues our planet faces.  It wants us to be aware of the results of our treatment of the planet.  If we don’t do our part to care for the Earth, we may cause too much damage.  We learn about conserving our natural resources including water, plants, and animals.

There are many things that we can reuse instead of throwing them in the trash.  Clothes can be donated so someone else can wear them.  Water bottles and other food containers can be washed and used again.  We can make craft projects to brighten up our home from materials that would have been thrown away.

We can also recycle as much as possible.  Plastic, glass, paper, and metal are all things that can be recycled.  Many communities even offer recycling bins for their citizens.  Recycling cuts down the materials that are sent to landfills and helps us conserve some of the natural resources by making recycled objects into new products.

Many schools and community groups have special activities on Earth Day.  Some activities may include cleaning up a park, making crafts from reusable objects, or planting trees.  There are many things we can do to help our environment.

Cesario Estrada Chavez was born on March 31 in 1927.  His family lived on a farm in Yuma, Arizona.  The family was not wealthy, but they lived comfortably.  Cesario grew up speaking Spanish until he went to school in 1933.  He was forced to change his name to Cesar and to speak only in English.  A few years later, Cesar’s grandmother died and the family property was sold to pay the debts.  Cesar and his family moved to California to live the life of migrant workers.

Migrant workers would move around to different farms wherever there was work.  As different crops were ready for harvest, the migrant workers would move to the farms that needed help.  This life was quite difficult and it was especially hard for the children in school to be continually moving from place to place.  When Cesar graduated middle school, he quit school and started working with his family on the farms.

A few years later, Cesar joined the Navy.  When he finished his obligation, he got married and started working again in manual labor positions.  During this time, he started volunteering with the Community Service Organization.  He helped register the migrant workers to vote.  He soon was elected the director of the CSO in 1959.

Cesar soon left the CSO to form a new organization, the NFWA (National Farm Workers of America).  This group focused on helping the farmworkers who were facing difficult working conditions.  The group helped offer an insurance program, a credit union, and even a newspaper.  If farmworkers were having problems, they would come to the NFWA for help.  Cesar Chavez and his organization would talk to the people in charge to advocate for better working conditions. If that didn’t work, they would often stage protests or boycotts to encourage the owners of the farms to make changes.

It didn’t take long for Cesar to realize that it wasn’t only the Mexican farmworkers who were facing trouble.  He soon joined forces with another organization to form the UFW (United Farm Workers).  This organization is still in existence today and works to ensure good working conditions for all farm workers.

Throughout his life, Cesar Chavez and his organizations worked to get better wages and living conditions for farmworkers.  One of his most famous sayings is:  Si se puede – yes, we can!  This was often chanted during the marches, pickets, and demonstrations asking for better conditions. Cesar died in his sleep of natural causes in April of 1993.  At the time he was testifying in court for yet another case of mistreatment.  He was a hard worker, helping people until the very day that he died.

After his death, Cesar Chavez was awarded the Presidental Medal of Honor and he was admitted into the California Hall of Fame.  March 31 has been proclaimed as Cesar Chavez Day.  It is a day to remember his contributions to our country.

John Chapman was born on September 26, 1774 in Massachussets.  His mother died a couple of years later after giving birth to his baby brother.  John studied as an apprentice to become an orchardist.

John started traveling around the country to start new nurseries.   He would plant a small nursery, build a fence to protect it, and find a local family to care for it while he was gone.  He would return every year or so to tend to the nursery.  As people began getting used to seeing him around, he soon gained the nickname Johnny Appleseed.

Johnny was a bit of a strange fellow.  He traveled with a pot on his head as a hat, but could use it to cook if he needed to camp.  His clothes were ragged and he preferred to travel barefooted.  He carried a bag of apple seeds and a Bible.

Johnny Appleseed was known for his kindness.  He loved to tell stories to children or read his Bible to families as he traveled.  He taught his Christian morals as he traveled.  Some even considered him a missionary.  He was kind to everyone he met, including animals.  The Native Americans respected him as he was kind and shared his seedlings with them.  One story says that he even had a wolf that traveled with him after Johnny cared for its broken leg.

The apple trees Johnny planted were a great help to the pioneers who were settling the regions where he traveled.  They were not the best for eating off the tree, but they were especially good for making applesauce and apple cider.  Johnny traveled through parts of Pennsylvania, Ohio, Illinois, West Virginia, and Indiana.  When Johnny died somewhere in Indiana in March of 1845, it is believed that he had about 1200 acres of land in his name that he had collected throughout his travels.  Some of the trees are still around today.

St. Patrick’s Day has been celebrated in Ireland since the 9th or 10th century.  We have records of it being celebrated in the United States as early as 1601.  This is one of the most widespread celebrations that focus on one country’s traditions.  This holiday was originally established to remember St. Patrick, the patron saint of Ireland, but it has since evolved more into a celebration of Irish traditions.

Ireland is one of the British Isles.  St. Patrick felt called to spread the Christian message to this country.  He established a strong presence of the church in Ireland and many legends and traditions in Ireland include Patrick.  Ireland is known for not having any snakes.  While there is no evidence that there ever were snakes in Ireland, the legend says that St. Patrick drove the snakes out of Ireland.  Some people believe that this was not a reference to the slithering reptiles, but a hidden reference to corrupt people.

Today, St. Patrick’s Day is a fun celebration in which people celebrate the Irish culture.  The holiday is in the middle of the Lent period in which people give up certain indulgences.  On this day is a day that the Lenten restrictions are lifted.  Many people wear green which is the color that represents Ireland.  Shamrocks are a popular decoration as they have been an Irish symbol for many years.  In fact, it is a tradition that the Irish Prime Minister presents shamrocks to the United States President on or around St. Patrick’s day.  You might also see leprechaun decorations.  Leprechauns are characters from Irish legends.  Sometimes they like to play tricks, but they are known to have a pot of gold at the end of the rainbow.

Many cities hold parades for St. Patrick’s day.  Chicago even colors one of the rivers green for the celebration.  Irish music and dance are often seen during this time.  This is a time to celebrate Irish heritage.